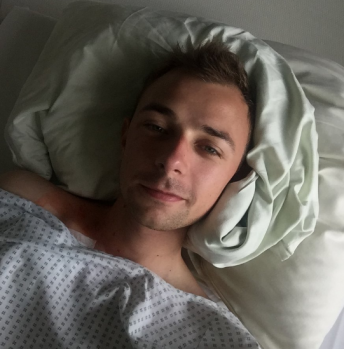 Citroen WRC star Stephane Lefebvre and his co-driver Gabin Moreau have given a graphic account of the monster crash that saw them lucky to escape with their lives in Rally Germany.

Negotiating the 40.8km Panzerplatte Lang stage, Lefebvre impacted a hilkenstein (large stone barrier) which sent the DS 3 WRC hurtling into the trees with the engine ripped from the front of the car.

The pair remain in hospital with Lefebvre suffering a broken rib and punctured lung while Moreau’s injuries were more extensive.

The co-driver has a broken right foot, broken left hand, cracked vertebra, collarbone injury and has undergone surgery for a fractured right tibia.

The pair are not expected to be able to return to their native French until either later this week or next week.

Lefebvre said he can remember the crash clearly.

“I had noted a right-hand turn with a corner that could be cut,” Lefebvre said.

“Given the marks left by the other competitors, I had turned in slightly early but the car drifted onto the outside of the corner and we hit a row of hilkensteins. The last rock turned the car around and sent it flying into the trees. That was what caused the most damage.”

Gabin said that M-Sport Ford Fiesta driver Eric Camilli and co-driver Benjamin Veillas were the first to arrive at the accident scene followed by medical teams before they were transferred to hospital by helicopter.

“When you look at the state of the car, I feel pretty fortunate,” Gabin said. 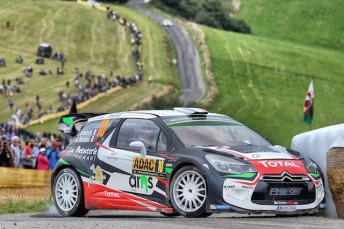 “The survival cell and the various items of equipment did their job, especially the reinforced sections which are not mandatory, but which were added to improve safety for the crew.

“It’s going to take a bit of time for the fractures to heal, but I’m determined to recover as quickly as possible.”

Lefebvre is resigned to the fact that he may not be able to compete at the next round, Rally Corsica from September 29-October 2.

“You can never control the outside environment in rallying and on this occasion, we paid a fairly heavy penalty for going off,” Lefebvre said.

“We’re going to need some time to get back on our feet. The only thing that is really getting to me is the fact I might not be able to take part in the Tour de Corse.

“For the time being, I’m just reading and replying to all the messages that we have received.

“It’s been really touching to get messages of support from our WRC colleagues and from supporters.”