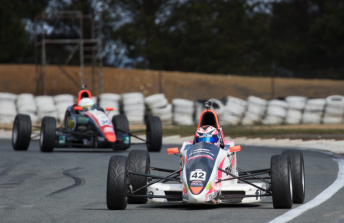 Leanne Tander has continued her charge towards the Australian Formula Ford Series title by taking out Round 4 at Wakefield Park.

The 36-year-old mother of two extended her advantage to 32 points over Formula 4 racer Will Brown with two rounds remaining.

Tander placed second in Races 1 and 2 before scoring victory in the final.

Brown fought through from sixth on the grid to win Race 2 before spinning out of contention in Race 3, eventually coming home eighth.

The opening race had earlier been won by Jayden Ojeda, who sits third in the series standings, 44 points adrift of Tander.

Aiming to take out the national title 16 years after placing third behind Luke Youlden and Rick Kelly, Tander says she’s looking forward to the deciding rounds.

“Winton is a circuit where we’ve been testing, so we know the car will be strong there, and Phillip Island is a circuit I’ve always enjoyed – so I can’t wait for the last two rounds,” Tander said. 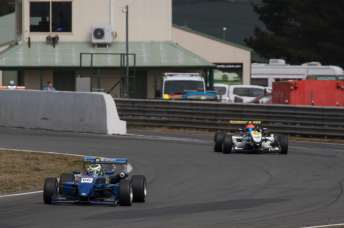 Gotch took out the City of Goulburn Cup

Gotch and his Dallara F307 proved the class of the 10 car field, which was largely made up of Formula 3 machinery.

The eventual winner dropped to fourth at the start due to a clutch issue before clawing his way back.

Gotch’s charge was assisted by a Safety Car period that brought erstwhile leader Tim Berryman into his clutches.

“We were battling clutch dramas for a lot of the weekend, and we were fortunate with the Safety Car, but the car was fantastic – the AGI Sport team did a great job,” Gotch said.

“Tim drove well and it was a challenge to get around him, but overall it was really fun racing throughout the weekend.”