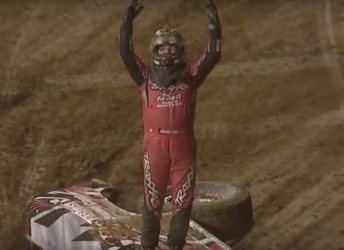 Sheldon Creed, the most successful driver in Stadium Super Trucks, has clinched a sweep of the two races at Charlotte.

Creed took the round overall from Matt Brabham who pocketed a second and a fourth from the weekend.

In the final 14-lap race, which included the introduction of a ‘joker’ element for the first time, Creed prevailed from Arie Luyendyk jr.

Jessie Johnson, coming in for his first SST race since 2013 held Brabham out of the podium.

Series founder Robby Gordon was on track to push for the win however the former IndyCar and NASCAR racer spun on the final lap and finished at the tail of the 10-truck field. Gordon had claimed third in the first race.

Morris, running as team-mate to Bill Hynes, was given pain-killing injections which saw him finish fourth in the opening race before battling to fifth in the finale.