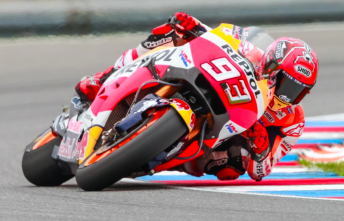 Marc Marquez has broken the outright lap record on his way to pole position for the Czech Republic Grand Prix at Brno.

The Repsol Honda rider produced a spectacular last gasp effort to take the top spot from Yamaha’s Jorge Lorenzo, who had shattered the circuit lap record earlier in the day in Practice 3.

Marquez sat second prior to his stunning late show that saw the double world champion dive underneath Valentino Rossi at the final corner on his way to an impressive 1:54.596s time.

“I was pushing 100 percent. I was lucky because Valentino (Rossi) was in front and with his slipstream I was able to be a little bit faster,” said Marquez.

“At the end, this move (on Rossi) gave me the pole position, but looking to the race I am very happy with FP4 because it is the (race) pace that is most important and we improved a lot.”

Lorenzo had looked in control of proceedings in the 15-minute Q2 session, but the reigning world champion was left to settle for second spot.

“We are happy with the second place because we have a good setup to keep a constant pace during the race.”

Andrea Iannone set his personal best after the chequered flag to give Ducati another front row start in third.

Andrea Dovizioso secured seventh despite being hampered by an apparent front tyre issue on his Ducati.

Jack Miller is a non-starter this weekend due to injuries sustained in a warm-up crash at the Austrian Grand Prix last weekend.