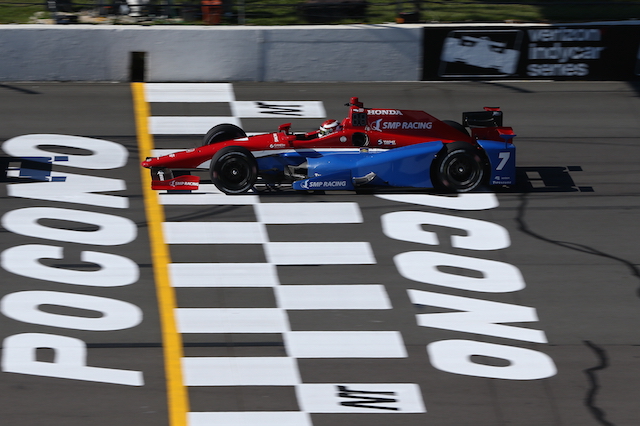 Mikhail Aleshin has claimed his first IndyCar pole at Pocono

Russian Mikhail Aleshin has soared to his maiden IndyCar pole, topping qualifying for the ABC Supply 500 at Pocono.

As IndyCar returned to the tri-oval with heavy hearts a year on from Justin Wilson’s fatal accident at the Pennsylvania track, Aleshin extracted a 220.44 mph (354.76 km/h) two-lap average.

The Schmidt-Peterson Honda driver was the 12th car to run in the single-car qualifying format, banking a session best 220.6 on his first flying lap to set up the pole effort.

Aleshin said he chanced his hand, taking a gamble after being on the edge of breaking loose and hitting the wall.

“We had a couple of moments in Turn 1, but I decided to keep it flat and see what would happen,” Aleshin admitted.

Josef Newgarden (Ed Carpenter Racing) crafted a 220.19 (354.36) to just fall short while AJ Foyt’s Takuma Sato was the only other runner to exceed the 220 average and will start third.

Helio Castroneves fared best of the Penske runners, qualifying fourth while Will Power was eighth with points leader Simon Pagenaud to start from 14th.

Carlos Munoz (Andretti Autosport) had occupied the top spot after an early run of 219.64 (353.47) but slipped to fifth ahead of Aleshin’s team-mate James Hinchcliffe and Andretti-Herta’s Indy 500 champ Alex Rossi.

Tony Kanaan was ninth ahead of Ed Carpenter.

The fourth Penske runner, Juan Montoya qualified 15th after the team scrambled to repair his car following a crash in practice.

Defending race champion Ryan Hunter-Reay was forced to sit out qualifying after an earlier heavy shunt but is confident he will return for final practice ahead of the race.