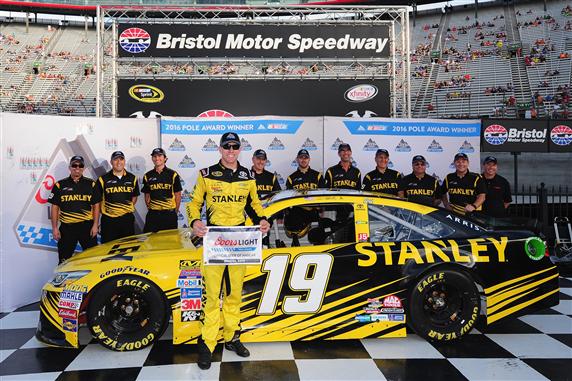 Edwards takes his fifth pole of 2016

Carl Edwards proved Joe Gibbs Racing will be hard to beat at Bristol Motor Speedway as he headed a trio JGR Toyotas in qualifying for Bristol Night Race.

In a good sign for Edwards, he won the day race at Bristol earlier this season after starting from pole.

Edwards’ team-mate Denny Hamlin will start second after breaking the track record in the first round of qualifying with a speed of 211.899km/h (131.668 mph) on the “World’s Fastest Halfmile”.

Rounding out the top five were Kyle Busch, Ryan Blaney and the fourth Gibbs Toyota of Matt Kenseth.

“We wouldn’t have had a shot at (the pole) if it wasn’t for them. We thought it was going to rain, so we didn’t practice qualifying or anything. My guys made great adjustments based on that information.

“I just hope we can finish it off the way we did in the spring.”

Also making news at Bristol was that Jeff Gordon will not race for the sidelined Dale Earnhardt Jr. next week at Michigan if NASCAR’s most popular driver remains out of the car.

Gordon, who is making his fourth start for the injured Earnhardt Jr., has a previous commitment and it would mean that Alex Bowman will again drive the #88 Hendrick Chevrolet after filling-in at New Hampshire.

Both Earnhardt Jr. and Hendrick Motorsports have stated that only after there is full medical clearance will he return to the car.