The South Aussie replaces Shane van Gisbergen, who drove for Coote in each of the last two years but is unavailable to return due to commitments with Supercars squad Red Bull.

World Time Attack has been held annually at SMP since 2010 and sees heavily modified tin-tops competing in a qualifying-style format.

The event is organised by Ian Baker who, as a long-time friend of the Slade family, recommended the two-time Supercars race winner to Coote when the drive became available.

“Driving race cars is what I love doing so I jump at most opportunities that come up, whether it be GT or something like this,” Slade told Speedcafe.com of the deal.

“I’ve only been in the car once so far (at Queensland Raceway) and it was more of a shakedown than anything, but it was enough to get a basic feel of what it’s like. 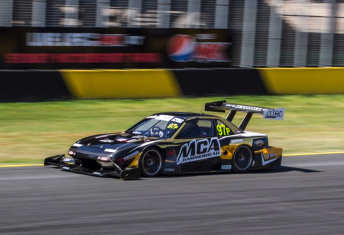 The Silvia Slade will drive at SMP

“There’s definitely plenty of grunt and plenty of aero, which is an area Murray’s team has worked on since last year’s event.

“Hopefully I’ll get the opportunity to drive the car a bit more before the event because I definitely think there’s more to be found in myself in a car like that than in more development bits and pieces.”

Van Gisbergen’s best time in the Silvia last year was a 1:25.37s, which is almost four seconds quicker than the current Supercars qualifying record set by Craig Lowndes in 2012.

Slade is confident that the car will have even more speed this year, but is unsure how it’ll stack up against its latest opposition.

“I think that car last year was relatively new and they’d pretty much rolled it off the trailer and went straight to the race meeting,” explained Slade.

“They’re in a lot better position preparation wise than last year, but I don’t really know what other people have got equipment wise.

“But I’ll drive the thing around, have fun and see how fast we can go.”