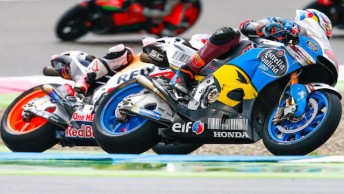 Jack Miller has been ruled out of the Czech GP

The Marc VDS team has ruled Australian rider Jack Miller out of this weekend’s Czech GP.

While Miller was given medical clearance, his team, the Honda Racing Corporation and management have decided the Townsville star should sit out the Brno round of the MotoGP Championship.

Miller suffered hairline fractures to his T6 vertebra and wrist in the high-side during the warm-up at the Red Bull Ring last weekend.

The decision to defer his comeback is to give Miller the best possible chance to recover from the injuries.

He is now set to make his return at the British GP at Silverstone from September 2-4.

Team principal Michael Bartholemy said: “Jack is a racer, so he obviously wanted to race after being passed fit today.

“However, after discussions with both HRC and Jack’s management team, we have made the decision to withdraw him from the Czech Grand Prix.

“For us it’s more important that he has more time to recover from the crash in Austria, because we want him back to full fitness as soon as possible.

“Our priority is to have a fully fit rider back on the bike and that’s why we made this decision.”

Miller sits 13th in the points standings after a signature year which saw him breakthrough for his maiden MotoGP triumph in a rain-hit Assen GP on June 26.