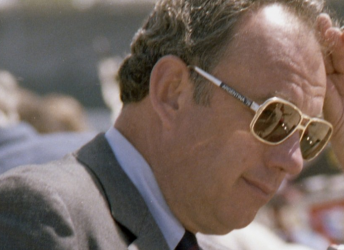 John Cooper, the former president of the Indianapolis Motor Speedway has died aged 83.

Remembered as one of only two people to occupy the position as both president of IMS and the Daytona International Speedway, Cooper became the first employee of the United States Auto Club in 1955 before moving to a position with the Leo Burnett advertising agency.

By 1972 Cooper became president of the former Ontario Speedway in southern California.

A move into the role as president at Indianapolis saw Cooper become instrumental in the merger of CART and USAC in 1979.

Cooper held close ties to NASCAR through his friendship with Bill France that saw him become president of Daytona from 1987 to 1990.

This led to Cooper becoming a key player in NASCAR holding its first race at Indianapolis in the early 1990’s.

Tributes across the US began pouring in for Cooper with the current IMS president Doug Boles proclaiming him as an iconic leader and pillar of American motor racing.

“The Indianapolis Motor Speedway has been blessed with strong leadership since Carl Fisher founded the track in 1909,” Boles said in a prepared statement.

“John Cooper was one of those iconic leaders. As the IMS president in the early ’80s, John helped lead a new thought process in track promotions, while balancing the importance of history to IMS and the Indianapolis 500.

“His many experiences in racing and business made him one of the most knowledgeable and thoughtful resources in our sport, and I enjoyed and appreciated the time he would take to offer advice and counsel related to the operations of a race track.

“John always maintained his love of racing, especially the Indianapolis 500, and is respected throughout the industry.

“Here at IMS, his influence is still felt today and our thoughts and prayers are with his family.”

“John’s association with motorsport began decades ago with the midgets, sprints and champ cars before he shifted to Melbourne as an executive of Proctor and Gamble,” Raymond wrote.

“After completing his overseas posting, he returned home (to the US) and served as the nominated executive for the Hulman family at the Indianapolis Motor Speedway before joining International Speedway Corporation at the invitation of the France family.

“I met Tom Cruise and Nicole Kidman in John’s office at Daytona a few hours before the final sequences of Days of Thunder were filmed on race day.

“He was featured in the movie as ‘Big John’, served as promoter of both the Daytona and Talladega super speedways.

“He was a close friend of Chris Economaki (legendary late US commentator) and I relish the time we spent together across the United States and here in Australia, particularly at Bathurst.

Speedcafe.com extends its condolences to Cooper’s family and large network of friends.