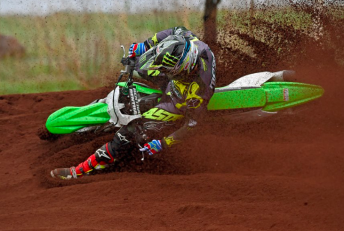 Two MX Nationals riders have been suspended amid an investigation by the Australian Sports Anti-Doping Authority (ASADA) after failing a drug test.

Ostarine, also known as MK-2866, was developed in 2009 and helps with muscle growth.

The twin brothers have been suspended from all forms of competition by Motorcycling Australia while ASADA conducts an investigation following the positive finding.

Earlier this month, Jake Moss announced he had resigned from the National Pump Monster Energy Kawasaki Racing Team to focus on his family and career away from competitive Motocross and Supercross racing.

ASADA tested the Kawasaki Motors Australia riders along with two other athletes in Dean Ferris and Nathan Crawford following the fourth round of the championship at Murray Bridge on May 22.

Motorcycling Australia has confirmed that both Ferris and Crawford showed ‘no adverse analytical findings’.

Both Jake and Matt Moss were absent from the last two rounds of the championship at Conondale and Shepparton due to the investigation.

Bound by the ASADA Act and ASADA Regulations, the Code, the WADA International Standard for the Protection of Privacy and Personal Information and the Privacy Act, Motorcycling Australia can now confirm that on 22nd of May 2016 the Australian Sports Anti-Doping Authority (ASADA) tested four individual athletes at the MX Nationals round held at Murray Bridge in South Australia.

Motorcycling Australia can also confirm that samples provided by both Jake Moss and Matt Moss have tested positive for Ostarine, a substance prohibited for use in sport under the World Anti-Doping Agency’s Prohibited List.

Both Jake and Matt Moss are now under investigation by ASADA, and have been provisionally suspended by Motorcycling Australia from any activity in their sport until the matter is resolved as per ASADA’s guidelines.

The other two riders tested at the same time – Dean Ferris and Nathan Crawford – had no adverse analytical findings.

An important part of the Australian Anti-Doping process is that the privacy of individuals is protected, and the ‘legislation ensures that an athlete or support person has their privacy protected while the matter is being reviewed’

ASADA conducts testing of Australian athletes according to the World Anti-Doping Agency’s (WADA) International Standard for Testing and Investigations, and as a government agency ASADA is bound by the Commonwealth Fraud Control guidelines as well as in accordance with the Australian Government Investigations Standards.

Throughout the investigation process the correct procedures have been followed to ensure the credibility of the athletes, promoter, governing body and ASADA has not been tarnished.

Only when the final determination has been made will Motorcycling Australia be in the position to make any further comments.