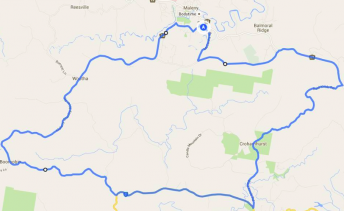 A proposal to host an Isle of Man TT style motorcycle race on the Sunshine Coast has been withdrawn.

Promoter Inside Line Events International has abandoned plans after failing to meet a deadline set by the Sunshine Coast Events Board for critical safety information relating to the proposed 47km course situated around Maleny.

The group, spearheaded by former motoring journalist David Rollins, lodged a proposal to the Sunshine Coast Council in June to host an Isle of Man TT style time trial event, initially tabled for December 14-17 next year.

The event, which required $4-8 million dollars of funding, aimed to attract motorcycle road racers from across the world.

The group plans to investigate other possible locations for the race.

“Yes, we have withdrawn the proposal to run a TT in the Sunshine coast,” read a statement from David Rollins in a post on the Sunshine Coast TT Facebook page.

“We could not meet the deadline for critical information set down by the Sunshine Coast Events Board and rather than have the incomplete proposal voted down, and have that black mark carried forward to any future proposal somewhere else, we chose to take the TT off the Event Board’s schedule.

“The sticking point was the course inspection/safety audit. These two items took some time to organise and even more time to conduct and have the necessary reports authored.

“This was no one’s fault. It was just the process and our proposal didn’t fit. The Sunshine Coast Council has been supportive and would have been a great partner for the event.

“Maleny would have been a great event hub and the roads, of course, are a motorcyclist’s dream (which was why we chose them).

“The small, but concerted campaign against the event had nothing to do with our decision to drop SCITT given that all the surveys showed there was enormous overwhelming public support for it within Maleny and elsewhere.

“Contributions made to the GoFundMe campaign, $345 minus the GoFundMe commission and other minor costs, will be split between Black Dog Ride and Westpac Rescue Helicopters within the month.

“To everyone who supported the concept with their passion and enthusiasm, trust me when I say that we’re more disappointed than you’ll be.

“But there are other possible venues in other states and we will continue our quest to bring the breathtaking excitement of road racing back to Australia.”