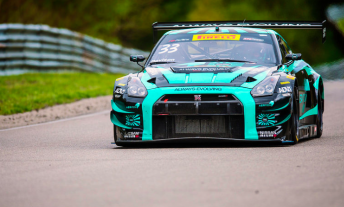 A pair of privately run Nissan GT-R GT3s are set to feature on the Bathurst 12 Hour and Australian GT grids next year.

As first reported by Sportscar365, an Australian buyer is on the verge of completing a deal to bring two GT-Rs to the country.

Although the identity of the buyer remains unknown, Speedcafe.com understands that a former Dunlop Series competitor is behind the project.

The 2014 specification Nissan GT-Rs in question feature as part of a factory backed Nissan effort in the Pirelli World Challenge with one currently driven by Australian James Davison.

The manufacturer has contested the last three editions of the Bathurst 12 Hour with a factory entry and is expected to return with at least one car next year.

Nissan Australia’s own GT-R GT3 is yet to make an appearance in Australian GT but, according to Nissan CEO Richard Emery, could do so later this season.

Emery has repeatedly expressed reservations over having privately run GT-Rs in Australia due to the manufacturer’s lack of a full customer support package.

While the likes of Audi has built 200 of its R8 GT3 than compete on all corners of the globe, less than 20 GT3 specification GT-Rs are in existence throughout Europe, Japan and the USA.