Walkinshaw continuing with two Holdens in 2017

Walkinshaw continuing with two Holdens in 2017 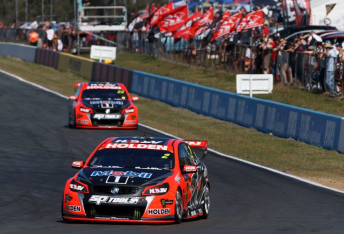 Walkinshaw will continue to field two cars in 2017

Walkinshaw Racing has confirmed that it will continue to field two Holdens in the Supercars Championship next season, despite losing its factory deal.

Holden announced today that Triple Eight will compete under the Red Bull Holden Racing Team from 2017, ending a 26-year run for Walkinshaw as the factory squad.

Speculation over Walkinshaw Racing’s future has swirled this season amid uncertainty over its relationship with Holden and continued struggles on track.

High profile drivers James Courtney and Garth Tander are also out of contract and have been linked with potential moves to other teams.

A statement from Walkinshaw this afternoon has confirmed its intentions to continue with two Commodores.

“Walkinshaw Racing remains committed to fielding two Commodores in the Virgin Australia Supercars Championship in 2017 and beyond following today’s announcement by Holden to end its sponsorship of the team at the end of 2016,” read the statement.

Team owner Ryan Walkinshaw, who recently confirmed that he is looking to sell a minority stake in the squad, described Holden’s move as disappointing.

“After fielding Holden’s official factory team for 26 years we are naturally disappointed but respect Holden’s decision,” he said.

“We are rightly proud to have enjoyed a wonderful relationship with Holden over the years, and have enjoyed many successes together.

“While our official motorsport partnership may have ended, our relationship with Holden remains strong and we continue to work closely on future road vehicle initiatives in line with our HSV business.”

Confirming that it will no longer provide any financial backing to the team, Holden chairman and managing director Mark Bernhard said ancillary support will be provided.

“We will continue to help Walkinshaw wherever we can,” said Bernhard.

“We support every Holden team in pitlane through various avenues such as marketing support, technical support, sponsorship acquisition, even down to helping design race liveries with certain teams.

“We will continue that with Walkinshaw.”

Bernhard downplayed suggestions that dumping Walkinshaw will cause a stir amongst Holden’s Supercars fanbase.

“We’ve got a lot of respect for the team, we’ve worked with them over many, many years, but we need to look at this from our overall business perspective.

“We’re certainly really excited that we’re committing to the sport and I think our fans and customers should be very pleased about that.

“This reinforces the future for Holden in the country as well as in motorsport.”

Bernhard declined to elaborate on the future of the company’s relationship with the Walkinshaw Group outside of racing.

“We continue to work very closely with HSV and on vehicles we will have with HSV in the future,” he said.

HSV is already facing a challenging future with the end of local Holden production next year.