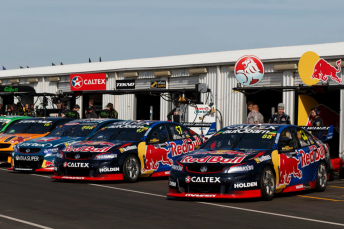 Triple Eight will build all of the next-gen Holden Supercars

As announced today, the Roland Dane owned squad will develop the new Commodore package next year before its race debut in 2018.

While the current field also includes Walkinshaw Racing and Brad Jones Racing built Commodores, Holden is set to introduce a centralised process for the new machinery.

A similar model had long been touted for the yet-to-be-confirmed engine package, which is expected to see the manufacturer move to V6 turbo power.

Triple Eight will however be the only squad to receive direct financial backing, with Walkinshaw demoted to a technical and marketing support package currently offered to the remaining teams.

“In principal any team will be able to run a Holden that will be prepared and manufactured by Triple Eight,” explained McNamara.

“So if you are a Brad Jones, a Lucas Dumbrell or a Walkinshaw or anybody else, a Kelly for that matter, if they want to race a Holden they can.

“They just ring Roland and send him a cheque.”

The move strengthens Triple Eight’s already formidable position which sees it supply an array of cars, components and intellectual property to a large portion of the field.

In addition to his own three entries, those currently running Triple Eight built chassis are Tekno Autosports, Team 18 and Lucas Dumbrell Motorsport.

Together they account for seven of the 14 Holdens in the current 26 car field.

“It is up to us to put a competitive package together from a racing point of view and a price point of view to enable as many people who would like to race a Holden Commodore to be able to do so,” Dane told Speedcafe.com.

“The car is very much under wraps at the moment and Holden will no doubt make everyone aware down the road.

“I’m very confident that we will do a good job with it (developing the 2018 car) and it will entail plenty of work, but we are used to it.”

Holden’s decision to move its Holden Racing Team brand to Triple Eight from next year is another landmark moment in the team’s history.

After passing up an opportunity to buy the Holden Racing Team, Triple Eight entered the category in 2003 through a takeover of Ford squad Briggs Motorsport.

Dane then engineered a switch to Holden for 2010 after Ford’s shock decision to withdraw its support a year earlier.

“Holden have been fully behind us for seven years so it is just an extension and a reinforcement of that relationship,” added Dane of the latest development.

“At the moment we are just going to concentrate on the balance of this year and do our job as Red Bull Racing Australia and then look at the implications of running as Red Bull Holden Racing Team next year.

“It will be very much business as usual next year but hopefully doing a great job for not only our existing fanbase, but for the whole Holden fanbase going forward.

“It is important for us to embrace all the Holden fans as we go into 2017.”

Dane has confirmed the team will continue its three-car format for next year, while Craig Lowndes’ Team Vortex entry will run under its existing moniker.

Meanwhile, the outfit’s current arrangement with title sponsor Red Bull will continue into next year with an option to extend the deal into 2018.