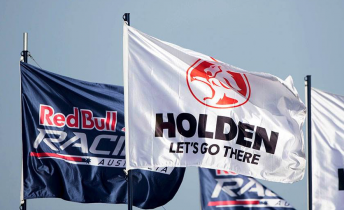 Holden will focus its support on Triple Eight from 2017

Triple Eight will take over the Holden Racing Team moniker next season as part of a new three-year commitment from the manufacturer to the Supercars Championship.

Holden has revealed the landmark news this afternoon, confirming that two of Triple Eight’s cars will be entered under the Red Bull Holden Racing Team banner from 2017.

It has also announced that Triple Eight will develop a Supercars version of the next generation Commodore to debut in 2018.

CLICK HERE for more on Triple Eight’s deal for the new car.

The move is a major blow to Walkinshaw Racing, which has operated as the factory team under the Holden-owned HRT brand since 1990.

Holden’s decision ends months of internal debate and public speculation over its future in Australian motorsport as it transitions away from local manufacturing next year.

While details of the new Opel Insignia-based Commodore are yet to be confirmed, it is expected that the race car will be fielded with a V6 turbo engine.

Non-V8 powerplants will be welcomed into the category from next season under its Gen2 rule platform.

With Nissan’s future still hanging in the balance, Holden is the first manufacturer to commit to the category beyond this year.

“I’m especially excited to announce that the next generation Commodore will be racing in Supercars in 2018 and beyond,” said Holden chairman and managing director Mark Bernhard.

“Triple Eight will develop, build, race and I’m sure win with the next generation Commodore Supercar from 2018.

“It’s a great move for Holden that reinforces with our fans and our customers our commitment to motorsport and especially our long term future in this country.

“Motorsport has played a significant role in Holden’s heritage and we’re very proud to be continuing on that tradition but in a new and exciting way.”

Acknowledging that its future in the category had been uncertain while analysis took place on its benefits, Bernhard added that racing will be a key platform for introducing the imported Commodore to Australia.

“There’s a debate in all of our sponsorship agreements and that’s part of the role of the marketing team to evaluate all sponsorships, whether it’s motorsport, the Collingwood football club or NRL,” he said.

“We see motorsport as a great opportunity for us to both honour the heritage that we have and the fans in the business, but also around the performance and technology around the next generation Commodore.

“We think this is a great way to demonstrate this to fans and customers.”

Holden’s decision to continue with a factory Supercars presence has been hailed by CEO James Warburton as a sign of the category’s strength.

“We are delighted with Holden’s announcement today that it has committed to the Virgin Australia Supercars Championship for at least the next three years,” said Warburton.

“This decision reinforces the underlying strength of Supercars and its position in Australian sport.”