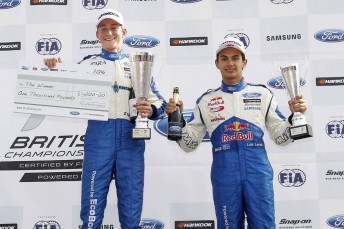 Australians Zane Goddard and Luis Leeds shared wins in the latest round of the British Formula 4 Championship at Knockhill.

Goddard (Double R) was promoted to third position in the opening heat after Petru Florescu (first across the line) was excluded from the meeting with Leeds (Arden) fifth.

In the second race Leeds landed the win from pole position ahead of Goddard with both drivers setting lap records.

Goddard then took the spoils in the 24-lap third heat by a commanding six seconds from Leeds.

The fight for the championship remains on a knife-edge with Leeds moving to 227, just five behind leader Max Fewtrell.

Leeds was ecstatic at the outcome to a weekend where he made up a lot of leeway in the points fight.

“This morning I was 48 points off the lead and now I’m only five away which is the beauty of this sport,” Leeds said.

The championship moves to Rockingham for the next round from August 27-28. 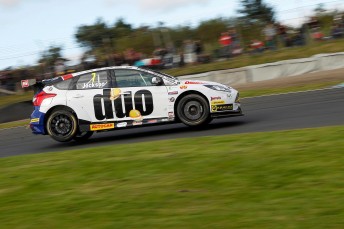 Sam Tordoff has emerged as the new leader of the British Touring Car Championship after an eventful round at Scotland’s Knockhill circuit.

The West Surrey Racing driver recorded two second place finishes and a fifth from the three heats to leave the weekend with a nine point lead in the title race.

Team BMR’s Jason Plato claimed the victory in the opening encounter of the weekend which marked his 500th race in the series.

Honda’s Matt Neal powered to victory in Race 2 as he made the most of soft compound tyres.

Plato led the majority of the race before he was overpowered by Neal in the closing stages.

Tordoff came through to finish second while Plato was left to settle for third.

The Ford Focus driver was put under pressure for the entirety before taking the flag by 0.2s from Tordoff and Plato, while reigning champion Gordon Shedden finished fourth for his best result of the weekend.

The British Touring Car Championship heads to Rockingham for the next round from August 27-28. 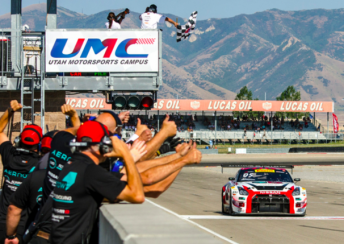 Bryan Heitkotter bagged a pair of wins to sweep the latest round of the Pirelli World Challenge at the Utah Motorsports Campus.

He then repeated the dose with a 1.3s victory over Fong in the second race while Long completed the podium again.

His Always Evolving Nissan team-mate, Craig Dolby finished 10th and eighth in the races after coming in to substitute for the suspended Australian James Davison.

Davison received his suspension at the previous round at Mid-Ohio when officials deemed that he made avoidable contact while on probation.

In the GT Cup, Sloan Urry beat Alec Udell in Race 1 before Udell returned to winning form in the final race.

The next round is scheduled for Sonoma from September 16-18.