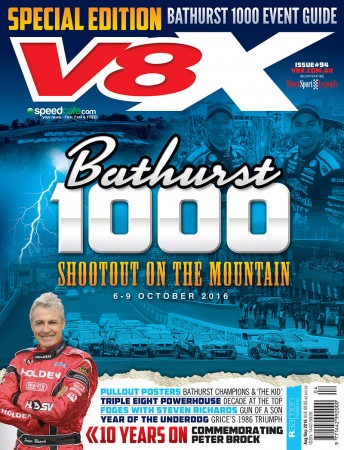 The print and digital editions of V8X Supercar Magazine issue #94 (August/September 2016) are on sale now.

V8X Supercar Magazine issue #94 is your must-have guide to the 2016 Supercheap Auto Bathurst, featuring a team-by-team guide to the endurance classic and all the records and facts from the Great Race.

The issue also pays tribute to the late Peter Brock, a decade since his passing, with the recollections of Bev Brock, Phil Brock, Allan Moffat, Dick Johnson and more.

Included in the print edition is a two-sided pullout poster featuring Bathurst champions and Craig ‘The Kid’ Lowndes.

The issue includes the following:

The Great Race Preview: We preview the 2016 Supercheap Auto Bathurst 1000.

Around the mountain: The honour roll, records and facts from the Great Race.

How we got here: The key developments over the history of the event.

The Brock Legacy: Remembering Peter Brock, a decade since his passing.

A decade of dominance: Ten years since its Bathurst breakthrough, a look at Triple Eight’s rule.

The Supercoach: Jeff Grech on his varied career leading some of the greats.

Year of the underdog: Celebrating the shock winners at Mount Panorama.

Shootout on the mountain: A tribute to the shootout for Bathurst pole.

Analysis: Going the distance: The leading issues heading into the enduros.

Analysis: Key Numbers: The key numbers around the 2016 Great Race.

Analysis: Going retro: Why Supercars is embracing its history.

Analysis: Beyond Sandown: Where to next for the 500km endurance event?

Mark Winterbottom Column: Frosty on gearing up for the endurance events.

Crag Lowndes Column: Lowndes on his love of Mount Panorama.

The Shootout: The best internationals to race at Mount Panorama.