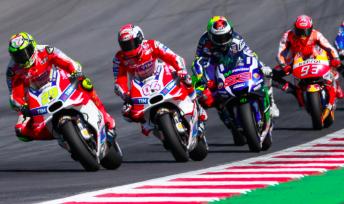 Casey Stoner is confident Ducati’s breakthrough MotoGP victory at the Austrian Grand Prix will lead to further success this season.

The Italian manufacturer ended a six-year wait for a premier class race win on Sunday when Andrea Iannone took the chequered flag in an historic 1-2 for the marque at the Red Bull Ring.

Now employed as a Ducati test rider, Stoner was on hand to enjoy the success at the Red Bull Ring, which he feels is a turning point for the squad.

The 30-year-old has been heavily involved in the development of the latest Desmosedici GP16 that Iannone and Andrea Dovizioso guided to first and second in Austria.

Stoner turned down an opportunity of a wildcard ride to compete at the Austrian Grand Prix in the week prior to the event.

“We’re really starting to round this package off and it’s starting to be competitive every weekend.

“If we can use the speed advantage we’ve got and hold it through the turns, then we’ve got ourselves a fantastic package.

“Being so much a part of this team and getting closer and closer with them, seeing how hard everyone is working, it was a massive relief when they finally crossed the line.

“I think we’ve been on the verge of winning all year, to be honest.

“Since race one, we’ve had a really good chance at almost every round this year, we’ve been slowly building and the last few rounds were getting better and better.”

The MotoGP world championship continues this weekend with a visit to the Czech Republic’s Brno circuit.

The round will see Pramac Ducati’s Danilo Petrucci carry a three-place grid penalty after stewards deemed the Italian rider caused a crash for Eugene Laverty on the final lap at the Red Bull Ring.