POLL: Would Simona succeed in Supercars? 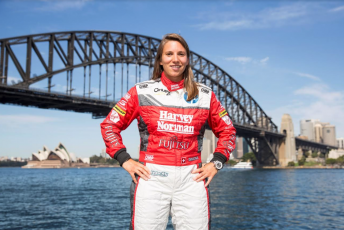 Simona de Silvestro is at the forefront of Supercars’ push to have a female on the grid full-time in 2017, but could she cut it in the Australian category?

Swiss de Silvestro and Australian Renee Gracie shared the Harvey Norman-sponsored Supergirls wildcard at Bathurst in 2015 and will both return to the entry for this year’s race.

A deal is understood to be in place between Supercars and the sponsor to fund a full-time entry next season, provided that a competitive female driver and car can be secured.

While there are no shortage of teams interested in the deal, Gracie’s steep learning curve in the Dunlop Series ensures de Silvestro is the only realistic possibility of finding a competitive female driver.

Her Supercars debut at Bathurst was also solid, impressing many by improving steadily to be within 3.5 seconds of the pace in qualifying before an early crash from Gracie wounded the car in the race.

Now armed with experience of the car and circuit, de Silvestro expects to be even more competitive upon her return in October.

If de Silvestro was to join the championship next year, she’d become the fourth European in six seasons to do so following Alexandre Premat (2012-2013), Maro Engel (2013) and Robert Dahlgren (2014).

Although also enjoying success in other categories, the trio’s struggles underlined the difficulties of being parachuted into the highly competitive championship’s unique cars on unfamiliar circuits.

What do you think? Would Simona de Silvestro prove competitive in the Supercars Championship?

Next Story Stanaway slated for Aston return in 2017