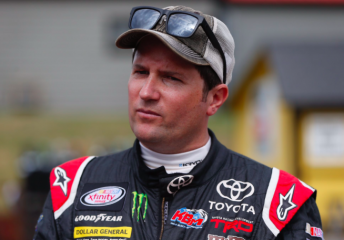 Owen Kelly salvaged a 16th place finish from a fraught run at a wet and wild Mid-Ohio round of the NASCAR Xfinity Series.

The Australian started from the front-row and deftly took over the lead at a lap nine restart following the first downpour.

The advantage lasted less than a lap, however, as Kelly spun out of the position on the slick circuit.

Two further offs in quick succession as he battled poor visibility left Kelly buried deep in the field for much of the going.

A subsequent mid-race charge was tempered by a pit road penalty for speeding during his stop for slicks once the track eventually dried out.

Staying on slicks when the bulk of the field ducked back in for wets briefly saw Kelly vault back to the lead under yellow with 20 to go before inevitably pulling in for his own grooved tyres prior to the restart.

Another off in the closing stages required a further unscheduled stop to clean the car’s windshield, after which the 39-year-old rejoined to finish 16th. 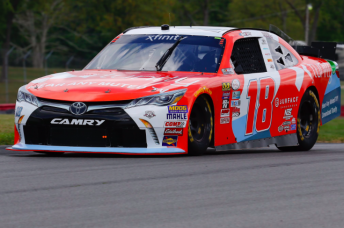 Pole-sitter Sam Hornish recovered from his own early offs to record second for Richard Childress while Ryan Blaney completed the top three for Team Penske.

The result proved a maiden Xfinity win for Marks and the perfect tribute to former Ganassi driver Bryan Clauson, who lost his life following a midget car crash last weekend.

“These are as tough conditions as you can put drivers in,” noted Marks, who led 43 of the 75 laps.

“It’s just really hard on everybody when it’s dry and wet, nobody knows what to do and strategy plays a big role.

“My speciality is road racing in the rain in these stock cars and I don’t get much of an opportunity to do it so when it presents itself you have to take advantage of it.”

Kelly will return for a second Xfinity Series event with Joe Gibbs Racing at Road America in two weeks time.

VIDEO: Kelly spins from the lead on lap 9