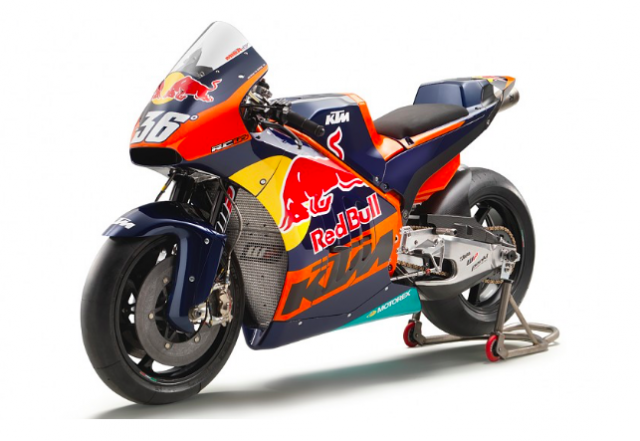 KTM has unveiled the livery it will run in its maiden MotoGP premier class campaign next season following a launch at the Red Bull Ring.

The Austrian manufacturer will adopt the blue and orange hues used by its sister machines in Moto3 alongside branding from energy drinks firm Red Bull.

KTM has been developing its RC16 machine since last year ahead of the 2017 campaign which will be spearheaded by current Tech3 Yamaha riders Bradley Smith and Pol Espargaro.

Kallio is set to jump aboard the machine to complete demo laps ahead of today’s Austrian Grand Prix.

“Almost two and a half years ago we made the decision that when we become number one in Europe we would be forced to take the last step (to join MotoGP),” said KTM CEO Stefan Pierer at the launch.

“Meanwhile we’re now selling more than 60% of our 200,000 bikes onroad and to get accepted at the highest level of the sport you must take part in MotoGP, the F1 of motorcycle racing.

“Racing is our philosophy, our motivation and if we enter the segment, for sure we will have a learning curve but we will reach the podium – and my life’s dream is to be the world champion in MotoGP.”