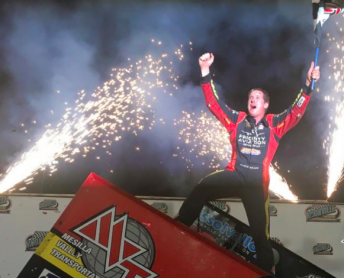 Jason Johnson has staved off a huge challenge from Donny Schatz to win the Five Hour Energy Knoxville Nationals in Iowa in spectacular fashion.

The regular Australian visitor took the lead on lap 11 from Daryn Pittman before Schatz swept to the front two laps later. It would become what many have already claimed to be the best Nationals decider in history.

Schatz – who was chasing his sixth consecutive Nationals win – led until the compulsory fuel stop at the halfway point.

Johnson elevated himself into the lead on lap 27 after the yellow.

Neither Schatz or Johnson were counting on Australia’s Kerry Madsen to be part of the fight, however the Sydney-sider’s Keneric Racing machine was the quickest on circuit as the leaders were in traffic.

Madsen was side-by-side with Schatz for several laps before getting past with 11 to go and started to close in on the lead. A brief touch of the wall for Johnson closed the battle back up again.

Schatz got back into the lead with three laps to go just as Madsen’s machine was expiring.

Johnson hung tough and snuck under Schatz again before opening his lead to a second with two laps to go.

Schatz threw everything at Johnson, but fell short, crossing the line before rubbing wheels with the new Champion on the slow down lap.

Shane Stewart got home for third followed by Pittman and NASCAR star, Kyle Larson – who drove from the back of the field after coming through the last chance qualifier B-Main.

Fourth starting Jamie Veal was the best placed Aussie in sixth place, followed by Chad Kemenah, Greg Hodnett and Sydney’s Ian Madsen who rounded out the top 10 after also coming through the B-Main.

Australia’s other hope in the 50 lap epic, James McFadden pulled out after the first lap. His team scrambled before the feature to change an engine in the #3H machine.

Other Australians in the event included Lynton Jeffrey who was fifth in the B, Brooke Tatnell 9th in the B, West Aussie Daniel Harding who was 9th in the D-Main, South Australia’s Scott Bogucki and Sydney’s Glen Saville were sixth and seventh in the E-Main respectively.

The spoils rested with Louisiana’s Johnson though, who battled to regain fitness after a broken back 12 months ago to take easily the biggest win of his career.