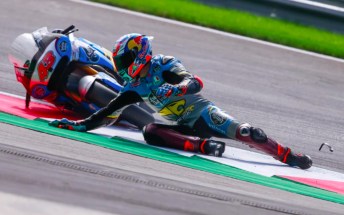 Jack Miller has been ruled out of the Austrian Grand Prix after sustaining injuries following a fall in warm-up at the Red Bull Ring.

The Marc VDS Honda rider has been diagnosed with hairline fractures to his T6 vertebra and a broken right wrist after suffering a high speed crash at Turn 8.

Miller was taken to the nearby Leoben hospital where his injuries were confirmed.

As result the Australian rider will be forced to miss a race for the second time this season after a foot injury ruled him out of the Circuit of Americas round in April.

The injury will come as a blow to the Assen race winner who entered this weekend’s race fully fit for the first time this year.

The Townsville rider had previously suffered a broken leg following a motocross crash in pre-season.

Miller’s latest injury will put him in doubt for next weekend’s Czech Republic Grand Prix at Brno. A decision on his participation will be made on Wednesday.