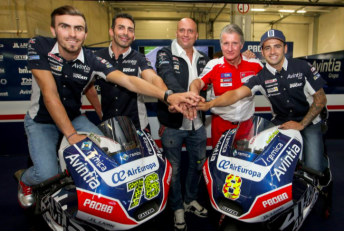 The announcement on the eve of the Austrian Grand Prix will see Barbera contest his fifth campaign with the team next year.

Barbera has enjoyed an impressive season so far which has seen the 29-year-old score seven top 10 finishes from nine races.

The Spaniard, who is seventh in the championship standings, will be issued with a 2016 specification Ducati in 2017.

“I think that we have shown a big progression over the last few years,” said Barbera.

“In just three seasons, we managed to move from 20th place to seventh in the standings, and we achieved this with an old bike.

“The team and I grew together over this period of time, so I’m extremely happy to sign a new contract for next season.

“We’ll finally have a competitive bike, and we will be able to fight for something big.”

Meanwhile, Baz has been offered a new deal despite a challenging debut season with the squad that has seen the Frenchman unable to regularly match the pace of his team-mate.

Avintia Racing had been keen to sign Stefan Bradl before the German confirmed plans to move to the World Superbike Championship next year.

“First of all I want to say big thanks to the team for offering me another opportunity because with the poor races we had so far, 90 percent of the teams would have decided to send me back home,” said Baz.

“But Avintia Racing showed that they trust me and gave me another chance.

“I also think that during the winter tests and the first few races I showed that I’m not so slow.

“Now we need to try to get back to that point and try to be as competitive as Hector.”

Aspar Ducati remain the only team yet to confirm its line-up for the 2017 campaign.

*expected to be confirmed