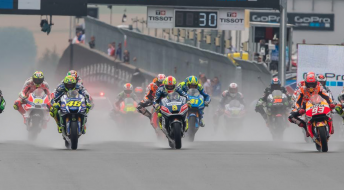 MotoGP is investigating a new pit to rider messaging system

MotoGP is evaluating a new electronic dashboard messaging system which will allow teams to send information to riders during races next season.

Championship promoter Dorna Sports has been working on the project known as ‘virtual boarding’ since last year with the device set to be tested at Aragon next month.

The development has come to light just weeks after suggestions the category should introduce pit-to-rider radios following a chaotic German Grand Prix.

The race at the Sachsenring saw riders fail to recognise pit board messages from teams to pit as track conditions rapidly dried.

MotoGP has confirmed that the new dashboard system could allow teams to send up to 25 detailed messages to riders during races.

“We are already sending some information to the dashboard of the riders, sporting information from race direction, like flags and things like that,” Dorna’s events managing director Javier Alonso told MotoGP.com

“We are evolving software that will allow teams to send 20-25 messages to riders and we are defining those messages.

“The next step is to finalise this list of messages and do some tests.

“We plan to do a test probably at Aragon, to send some messages to the riders and see how it works.

“The idea is that next year if everything goes well, teams will be able to send more or less the same messages they have right now on the boards in pitlane, to the dashboard of the riders.”

Meanwhile, Suzuki rider Aleix Espargaro has suffered a fractured finger following a crash in Practice 2 at the Red Bull Ring ahead of this weekend’s Austrian Grand Prix.

The Spaniard’s injury will be evaluated before he is given the green light to compete in Saturday’s Practice 3.