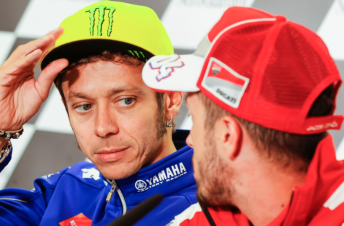 Valentino Rossi has led a request for further changes to be made to the Red Bull Ring to improve safety for future events ahead of this weekend’s Austrian Grand Prix.

The Red Bull Ring has come in for criticism from riders with the venue’s tarmac run-off areas and the proximity of the walls in the braking zones at several corners particular areas of concern.

This year sees the circuit return to the MotoGP calendar for the first time since 1997.

Following last month’s official test organisers have already moved to narrow the final corner by three metres to lessen the risk of a serious accident.

Nine-time world champion Rossi has backed the changes but insists more work is required to address what he feels is a ‘dangerous circuit’.

Rider safety has been thrust to the forefront in MotoGP this season following the death of Moto2 rider Luis Salom at Barcelona in June.

“First of all, this track is very fast and when the track is fast, it’s always dangerous,” said Rossi.

“There are other points (than the final corner), but especially after the two lefts, the exit of the right before the two last corners.

“The exit from Turn 8 remains very dangerous because in a normal lap you go full throttle at a very high speed and the wall is very close.

“This for me is the most dangerous point that we have to try to improve for the next few years.”

Ducati’s Andrea Dovizioso agrees with Rossi’s viewpoint before going on to highlight concerns regarding Turn 4.

“Like Valentino says, Turn 8 for sure we have to do something for the future,” said Dovizioso.

“During the weekend we will see at Turn 4, the run-off area maybe is not enough.”

Opening practice for the Austrian Grand Prix is set to begin this evening.

Meanwhile, MotoGP has confirmed that the German Grand Prix will continue to be held at the Scahsenring circuit until 2021 following the signing of a new five-year contract.