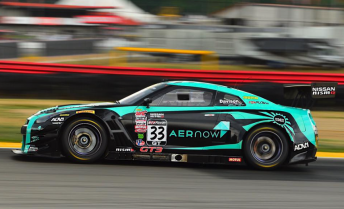 James Davison will be forced to sit out the opening race of this weekend’s Pirelli World Challenge round as punishment for an incident at Mid-Ohio last month.

The 29-year-old Australian was involved in a clash with the K-Pax McLaren of Colin Thompson at Mid-Ohio while already on probation for an earlier misdemeanour.

Davison’s penalty for “making avoidable contact while on probation” also includes a $5,000 fine and an additional three-race probation.

The driver currently sits sixth in the points standings heading into this weekend’s Utah double-header aboard the AIM Autosport-run Nissan GT-R.

The team has confirmed that Blancpain GT Series driver Craig Dolby will step in for Davison in Utah.

Englishman Dolby is in the frame to join the team on a full-time basis next year, when it is expected to expand to a third car.