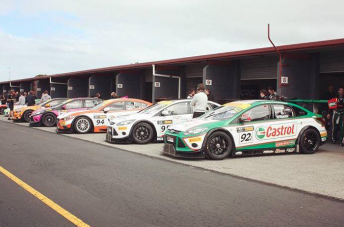 MARC Cars Australia has confirmed plans to compete in the Sepang 12 Hours as the squad looks to expand its international program.

The Queensland outfit will field a three-car attack for the Malaysian endurance (December 10-11) which acts as the final round of the inaugural Intercontinental GT Challenge Series.

MARC Cars Australia have featured regularly on the international stage predominantly in the Creventic Endurance Series.

A debut in the Sepang 12 Hours has arrived after receiving recognition from event organisers SRO.

Driver line-ups for Sepang are yet to be finalised for the event, which will also provide a warm-up for February’s Bathurst 12 Hour.

MARC Cars will field three of its V8 powered touring cars in the GTC Class.

The event is set to be the start of an international expansion with the operation intending to compete in the four round Intercontinental GT Challenge Series next year, subject to SRO approval for the Spa 24 Hours and Laguna Seca events.

The series is due to begin at the Bathurst 12 Hour before moving to the Spa 24 Hours, Laguna Seca and finally the Sepang 12 Hours.

“The SRO events are the pinnacle of GT racing around the world,” MARC Cars Australia owner Ryan McLeod told Speedcafe.com.

“It is good to be recognised and we will keep pushing to make our cars eligible for more events.

“We haven’t confirmed (entries) for the four events but it is our intention to compete in the entire Intercontinental GT Challenge Series, but talks are ongoing with SRO about that.

“We are eligible for Sepang so we are going to go and do that with three cars and put some runs on the board there.

“We are working through the line-ups at the moment but our core group of drivers will make up the bulk of it.

“We have had nearly 60 drivers drive the cars at different events so we have got quite a pool of drivers.

“The idea of the MARC Cars is to let people compete in a cost effective manner and that is why the car has been accepted, and I think it is a good addition to the series.”

MARC Cars Australia will feature next in the Australian GT Trophy Series finale at Phillip Island from September 9-11.