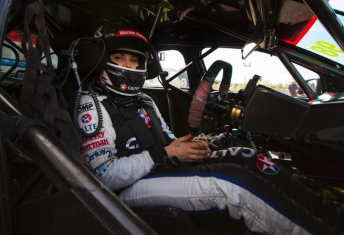 Renee Gracie admits she is still a ‘few years away’ from being ready to tackle the cut and thrust of a full-time Supercars seat.

Supercars sees marketing value in a female driver graduating to the main game as it looks to build on the platform provided by the all-female Harvey Norman Supergirls Bathurst 1000 wildcard entry.

While Gracie believes she is the best placed female driver to make the leap to the main game on a full-time basis, the 21-year-old has made a frank admission that she is not ready to commit to such a move despite support from the category.

Gracie is the most experienced of the current crop of female Supercars drivers, with the Brisbane-born racer embarking upon a second campaign in the Dunlop Series this year.

Currently 20th in the Dunlop Series standings, she wishes to hone her skills more to ensure a future move to Supercars is not short-lived.

“It is something we are looking at but it is something I will do when I think I’m more capable of being able to compete competitively,” Gracie told Speedcafe.com.

“I’m probably in the best position as I’ve had the most experience in a V8 Supercar in the last 14 years since Leanne Tander last raced.

“It is something that I’m confident in doing but I’m not going to rush into it. I think if I do my career will be over before it starts.

“If there is another female that wants to come in and do it then that’s great. I don’t think I’m ready. It is such a big thing to undertake.

“I think it (moving to Supercars) is a few years away even though there is a lot of support.

“This is a long term goal for me and just because Supercars want it now doesn’t worry me because I know when I’m ready they will still want me.”

Gracie will however have an opportunity to tackle the Supercars field at the Supercheap Auto Bathurst 1000 alongside de Silvestro from October 6-9.

The Queenslander says there is much less hype around the wildcard entry this year, which she feels will help her produce an improved performance.

Gracie suffered a crash at Forrest’s Elbow during the race last year when she slipped on an oil patch, before the entry soldiered on to finish 21st after completing 121 of the 161 laps.

“I think it is just going to be a better year as we can focus more on what we have got to do,” added Gracie.

“Last year was much more of a media circus. We were focussed on doing well but we just didn’t have a lot of time as everything was so busy and crazy.

“There is a bit less hype around us so we can now sit down and put our heads together to make sure we do a better job than last year.

“What happened (with the crash) last year can happen to anyone.

“I definitely think between Simona and I, our attitude is going to be better and a lot more aggressive. I have no doubt that we will improve.”