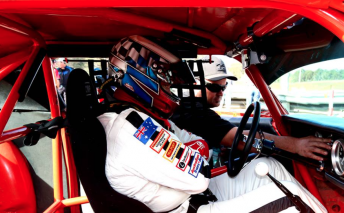 Ready to take on more of a challenge, O’Brien says a 1969 Chevrolet Camaro is in the process of being built which the Queenslander intends to campaign in TCM next season.

O’Brien swept the four Trans-Am races that were on the program at the new TA2 Racing Series at Lakeside last weekend.

Over the last couple of years O’Brien has been a prolific winner at the Trans-Am meetings, winning dozens of races.

“Last year we ran in about 28 races but only three of those were in TCM (Pontiac Firebird) at the Queensland Raceway round,” O’Brien told Speedcafe.com.

“We had about 26 wins with the Pontiac last year and this year we’ve done 20 races so far for 17 wins.

“I’d like to not so much do any more of the Trans-Am races but selected TCM races.

“It’s been fun doing what I’ve been doing last year and this year but I need a bit more of a challenge.

‘When I ran in V8 Utes it was a great challenge. You were struggling to be in the top five or six places and that’s where I like being. I don’t like winning races easily.

“The Camaro which I want to run in TCM next year is probably well over halfway to being built,” added O’Brien, a former star in Australian Touring Cars in the 1970’s and 1980’s.

“At this stage, it should be finished by Christmas. I’d like to run at Adelaide (Clipsal 500) if TCM are back on the program there.”

The 2017 Touring Car Masters schedule is yet to be released.