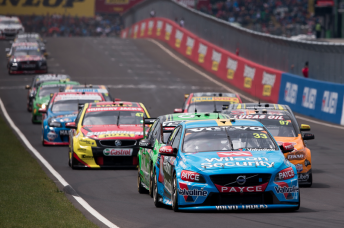 A display of Peter Brock’s race cars will provide a highlight to the 10th anniversary of the ‘King of the Mountain’ trophy named in his honour at Bathurst in October.

The bulk of his nine Bathurst-winning machines along with several other iconic #05 cars will add to the atmosphere at the Supercheap Auto Bathurst 1000 from October 6-9.

Fittingly, his protege Craig Lowndes along with team-mate Jamie Whincup were the first to clap hands on the new trophy a month later in the most emotionally charged Bathurst 1000 in history.

“Peter Brock left an incredible legacy for our sport and it’s only fitting that we should recognise it at this year’s Supercheap Auto Bathurst 1000,” Warburton said in a prepared statement.

“He was not only a brilliant driver but he changed the sport. He opened it up to new audiences and ushered in a new professional era. Most of all, he cared passionately about the fans.

“Today our drivers are among the most accessible athletes in Australian sport and that is in large part due to the legacy of Peter Brock.”

“2016 will be another great year and Bathurst, the home of the iconic motor racing circuit, is ready for the racing to begin,” Cr Rush said.

Stay tuned to Speedcafe.com for more news on the Supergirls entry.