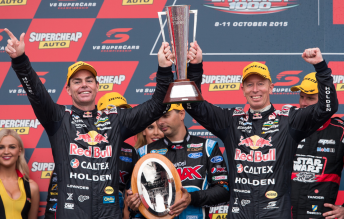 Brock accumulated a record nine wins in the Bathurst 1000 in a run from 1972 to 1987, however his popular understudy is inching ever closer to the mark.

Following his win last year alongside co-driver Steven Richards, Lowndes has now moved to six wins in The Great Race, one short of Jim Richards who sits second on the all-time list and who retired from Supercars following the 2006 1000km classic.

Speaking at the Sydney launch for the Supercheap Auto Bathurst 1000 from October 6-9, Bev Brock admitted she ‘quietly barracks for Craig’.

“Can he get to nine (wins)? I would like to think so,” Bev said at the launch.

“But this is a very different game today than what it was years ago.

“The dynamics are changing, the competition is there and all we can do is wait and see. It’s year by year.

“It’s a huge challenge for all of them. I sit there and I certainly barrack for Craig quietly.

“But I would like to see him beat Peter’s record.”

Lowndes famously said that he ‘felt Brock riding on his shoulder’ when he won the first Bathurst 1000 to be staged following the celebrated racer’s death in a tarmac rally in 2006.

At the launch Lowndes said: “I’ve always said it’d be difficult to get nine but the target’s there and records are made to be broken.