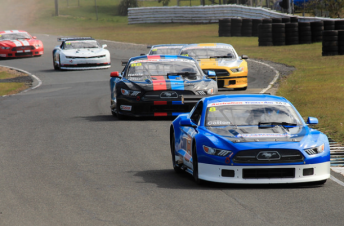 Former Supercars privateer Craig Harris (Ford Mustang) netted the series’ maiden win from pole position before Cotton went on to score a hat-trick of victories in the final three races.

The Canberra racer, who finished second in the opener, was pushed hard by Harris in each of the heats before going on to take the chequered flag.

“I wasn’t expecting a lot this weekend, this was only my second ever race meeting at Lakeside,” said Cotton.

“The guys I am racing with are so professional, a lot of them have come from a lifetime of racing. The cars are all the same so it comes down to the driver and I was lucky enough to have a good run.”

Robinson was impressed by the category’s maiden competitive outing.

“It couldn’t have gone any better in terms of the way the guys drove, the presentation of the vehicles and the feedback from the fans,” said Robinson.

“All in all it was a fantastic effort by all involved and we all can’t wait for the next round.”

Organisers have previously confirmed the grid will expand to 17 cars before the second round at Queensland Raceway from October 15-16.