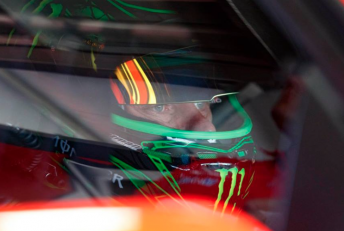 James Courtney has emerged as the next key figure in the Supercars silly season puzzle with his future beyond 2016 undetermined.

The 2010 Supercars champion’s current deal at the Holden Racing Team is due to expire at the end of the season, which could see the Gold-Coast driver move onto fresh pastures next year.

Courtney moved to the HRT in 2011 after securing his first title in a nail-biting climax for Dick Johnson Racing.

He has however endured a challenging spell with the team unable to deliver him a genuine title challenge.

Struggles have continued this season with the Melbourne squad battling for consistency and car speed amid uncertainly surrounding the future of its factory Holden support.

As seats at high profile squads Triple Eight, Prodrive and the emerging force in DJR Team Penske fill up, Courtney’s options are narrowing.

His future will largely be handled by manager and BTCC boss Alan Gow, who is currently in the process of providing options for his driver.

Key to Courtney’s next move will be the prospect of further Supercars success having already highlighted his desire for more titles and a maiden Supercheap Auto Bathurst 1000 triumph.

While the Holden Racing Team may still offer him a drive next season, the driver would need to be reassured the team could challenge for honours after a difficult 2016.

Another option could see him move to Nissan if the Japanese marque decides to continue its involvement in the series, which is still being thrashed out.

The prospect of racing for a rapidly improving factory squad could be enough to lure the 36-year-old.

Meanwhile, there is a vacancy at Garry Rogers Motorsport following the departure of Scott McLaughlin to DJR Team Penske for 2017.

Although, the Melbourne outfit is likely to face upheaval after Volvo announced plans to withdraw from the sport and take its S60 machines back to Sweden earlier this year.

Brad Jones Racing could also be a potential new home for him with the Albury squad yet to finalise its options for 2017.

BJR has proved more than capable with the current COTF Commodore scoring more wins than HRT since its 2013 introduction.

Meanwhile, Courtney has touted the possibility of leaving Supercars altogether to race overseas having been linked to a return to Japan’s SuperGT, where he raced in 2004 and 2005.

While this has been labelled as a back up option compared to continuing in Supercars, there may be other avenues afoot for Courtney to explore internationally.

Where will James Courtney land in 2017? Cast your vote below.