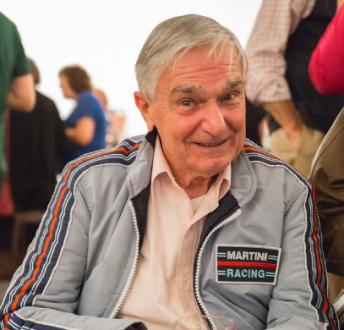 A cross section of the motor racing world paid tribute to well known competitor and identity Grahame Ward at a funeral service on the Gold Coast.

Younger brother Tony Ward delivered a fitting eulogy for his sibling that encapsulated the many periods of his life.

Ward was praised for being a passionate and caring soul with a kind heart and calming disposition.

Ward’s formative years were spent in Dubbo where the seeds for his automotive passion were sown.

He would become a racer with starts in the Armstrong 500 at Bathurst including a 16th in a Volvo 122S he shared with Barry Collerson in 1965.

Memories of Ward importing Lancia vehicles to Australia as their agent in Sydney and operating the Lancia stand at the Sydney Motor show for several years were re-lived.

Ward had accumulated an impressive personal car collection over the years which included a Rolls-Royce and an early 1980’s Ferrari 400i, one of less than 1500 built.

For five years Ward held the role as the promotions and public relations manager for the late Keith Williams’ Surfers Paradise International Raceway in the 1970’s.

Together with Barry Nixon-Smith, a former racer and car dealer, Ward kicked off the Gemini Series, a grassroots one-make category that was to provide an important launching pad for many drivers with its inception in the mid 1970’s.

Ward later made a statement in Europe by campaigning an A9X Torana in a wide variety of circuit and road rallies.

He had formed an association with the late and celebrated motoring/motorsport journalist Mike Kable with the pair making regular annual trips to Italy.

He had also formed a close association with the late Sir Jack Brabham and had struck up a long standing friendship with Formula 1 powerbroker Bernie Ecclestone.