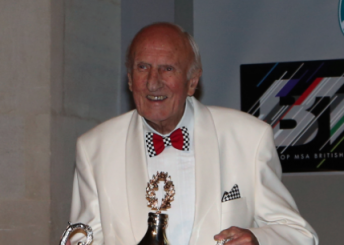 Jack Sears with the trophy named in his honour

Jack Sears the inaugural winner of the then British Saloon Car Championship has died aged 86.

Sears shot to fame by winning the 1958 title which was the forerunner of what is now the British Touring Car Championship.

He claimed the title in an unusual fashion having ended the season tied on points with rival Tommy Sopwith.

The championship was decided by a shootout between the drivers using identical Riley 1.5s at Brands Hatch with Sears coming out on top.

‘Gentleman Jack’ enjoyed further BTCC success in 1963 when he claimed his second title behind the wheel of the mammoth Ford Galaxie.

Alongside his touring car exploits, Sears also enjoyed a successful GT career highlighted by starts at Le Mans and a triumph in the 1964 Autosport 3 Hour at Snetterton. 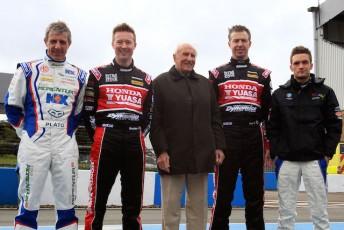 Sears continued to be closely linked with the BTCC with rookie drivers challenging for the ‘Jack Sears Trophy’.

“It is with great regret and genuine sadness to learn of Jack’s death,” Alan Gow, BTCC Series Director, said in a statement.

“I really liked Jack a lot, not only as an extremely talented and inspirational racing driver, but more importantly as a hugely popular, humble and impressive human being.

“Jack loved this championship and continued to play an active part in the BTCC right up until his passing.

“He will be sorely missed by everyone involved in the BTCC, but our immediate thoughts are with his family and closest friends at this time.”

A one minute’s silence will be held to mark his death at the next round of the BTCC at Knockhill this weekend.

Sears’ son David followed his father into motorsport where he enjoyed a successful racing career before going on to manage the Super Nova GP2 squad and several Formula drivers.

Speedcafe.com passes on its condolences to Sears’ family and friends.