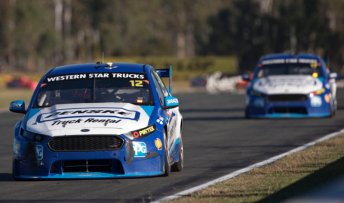 DJR Team Penske is targeting a strong Pirtek Enduro Cup showing having tailored much of its in-season development around the championship’s three endurance events.

The Queensland operation has endured a run of inconsistent form during the first half of the campaign after being tipped to regularly challenge the frontrunners by many in the off-season.

Flashes of outright pace have produced pole positions at the Clipsal 500 and three third place finishes at Phillip Island and Winton from drivers Fabian Coulthard and Scott Pye.

Since Hidden Valley form has fluctuated but the team has been encouraged by signs of improvement it hopes to transform into results in the second half of the season.

“The mid-season break gives us a chance to recharge the batteries and to have a look at where we are,” Story told Speedcafe.com.

“We’re not satisfied with where we are at currently.

“On balance there are some encouraging signs with the progress we have made in this year, but we need to consistently back up top five finishes and qualify closer to the mark.

“A big priority for this year has been the Pirtek Enduro Cup races.

“We have been focussing on them even in the early stages of this year and hopefully it will show up in the longer races.

“There are things that we have done to the cars throughout the year that have been developed solely for the enduros.

“We know its (the car’s) strengths and weaknesses and we are trying to make it better.

“But we need to get results on the board to show that we have taken a step forward.”

Story, however, remains confident his team is edging closer to executing the complete performance.

“You only need to look at recent events that we have shown signs of pace to be consistently in the top 10 and punch into the top five, but we haven’t been able to put it all together,” he added.

“If you make a mistake in this category you are going to be punished for it.

“We need to show that we are improving and that is what we plan to do when we go to Sydney Motorsport Park in a few weeks time.”