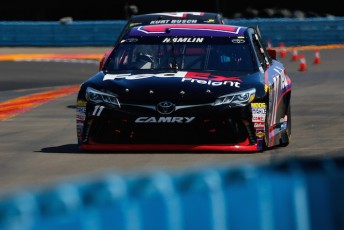 The race was red flagged with six to go after a crash involving Kevin Harvick, David Ragan and Pocono winner Chris Buescher.

Meanwhile Logano fell into the clutches of Keselowski as the pair traded blows in for a period before the latter prevailed to claim third.

Truex jr unleashed some aggressive moves on the final lap which ultimately saw him spin on the final turn before he crossed the line in eighth place after Keselowski made contact with the #78 Camry.

The race was red flagged for the first time with a multi-car pile-up that saw Jimmie Johnson, Ricky Stenhouse jr and Greg Biffle eliminated with 38 laps remaining.