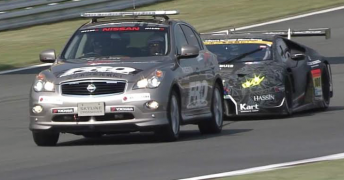 Jono Lester’s Lamborghini Huracan being towed back to the pits

The New Zealander was due to contest the fifth round of the popular Japanese series before an oil leak struck in practice, which led to an engine failure on the Direction Racing Lamborghini Huracan.

Lester and co-driver Kyosuke Mineo were due to start from the rear of the GT300 grid before the team elected to withdraw from the event.

The 26-year-old will however return to Super GT with Direction Racing for the sixth round at Suzuka from August 27-28.

“Unfortunately we won’t be racing in tomorrow’s Fuji 300 and my Super GT debut will have to wait until the Suzuka 1000km in three week’s time,” said Lester.

“We had a troubled practice day today with the car suffering an oil leak and eventual engine failure. I was unable to drive the car at all which was a frustration.

“We have a new engine going into the car on Monday for Suzuka, where I can attack my first Super GT event with full confidence after wins there in both Super Trofeo and the Petronas SLS in years gone by.”

Fellow countryman Nick Cassidy has qualified in 10th spot in the GT500 class in the TOM’S Lexus RCF alongside Daisuke Ito.