Triple Eight boss Roland Dane believes his team cannot afford to relax in the mid-season break despite its impressive recent run of form.

The Queensland operation has asserted itself as the dominant force in the Virgin Australia Supercars Championship this season after winning five of the last six races.

Triple Eight underwent a sizeable change in the off-season by expanding to a three car concern which presented a new challenge to conquer this year.

After a period of indifferent form across its three cars, the squad hit its stride since Darwin allowing drivers Jamie Whincup, Shane van Gisbergen and Craig Lowndes to occupy first, second and fourth in the championship.

The turnaround in form was highlighted by a podium lock out in Race 16 at Queensland Raceway last month prior to the mid-season break. 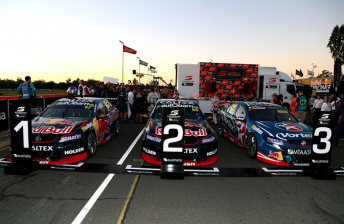 While impressed by his squad’s form, Dane says the strength of the opposition means his team must continue to push forward during the break.

Prodrive has emerged as Triple Eight’s nearest challengers with Mark Winterbottom lying third in the standings.

“By the same token we are getting ready for the second part of the season and we will use this break to get on top of our preparations for the enduros.

“For sure, we have got to keep pushing. The others are not going to standstill.

“I know that one or two teams and drivers have probably put all their eggs in the enduro basket, whereas we have tried to take a longer view of the championship.

“But I don’t expect Prodrive or Mark Winterbottom to let up at all. We don’t underestimate the strength of the opposition.”

The break is set to be a busy period at the Banyo workshop with work underway to complete a new chassis for Whincup to debut at the Red Rooster Sydney Super Sprint August 26-28.

The team is also working to deliver a new car to be used by customer squad Team 18 at the Sydney Motorsport Park event.

Alongside its car build projects, team manager Mark Dutton insists Triple Eight is focussed on extracting more from its cars for the second half of the season.

“By our own admission we believe we could have done a better job on several difficult occasions,” Dutton told Speedcafe.com.

“We have been gaining momentum lately but the big thing with this gap between the races is not lose any of that momentum, because it is so easy to do. That is the big focus now.

“It is good thing for us that we haven’t done a perfect job. We know where we are lacking and where we could have done a better job.

“We know there is more to come and that is really good.”