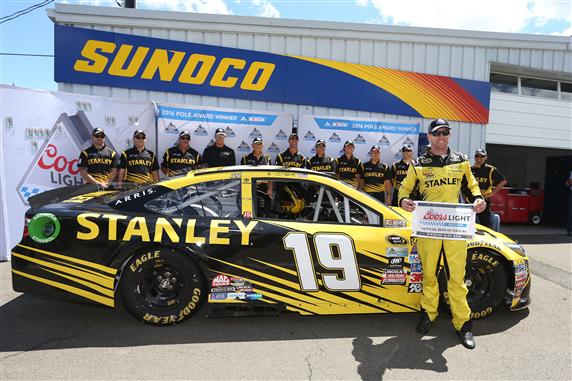 Edwards with his fourth pole of 2016

Carl Edwards has swept both road course poles in the NASCAR Sprint Cup with the fastest time in qualifying at Watkins Glen.

It was also Edwards’ fourth pole of the season and 20th of his career.

“I think (Sunday) is going to be a little bit of an adventure,” said Edwards.

“The new pavement, nobody knows how that’s going to go along deep into the runs with tyre build-up. I think the braking zones are pretty tough, and it’s going to be nice and warm.

“So, just got to stay upfront, can’t make any mistakes. I love road races. They’re so much fun.

“I got to talk to Boris Said, who’s basically my road racing coach to start, so that was cool today.

“Hopefully, tonight I’ll get me some good rest and hopefully be very competitive tomorrow.”

“We’ve got to work a little bit in race trim, but we’re starting up front, and we’ve got a great pit crew, and hopefully we can put (the car) in Victory Lane.”

Truex Jr. will start 14th after his fast lap was ruined by Ricky Stenhouse Jr., who on his out lap got in the way of the Toyota driver.

Truex then on his cool down lap was less than helpful for Stenhouse on his fast run. The Ford driver will start 30th.

Other notables were Jeff Gordon in 21st and road racing specialist AJ Allmendinger in ninth.