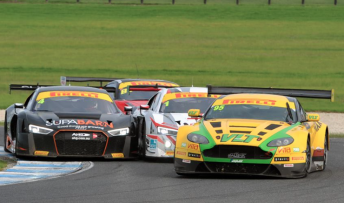 The Australian GT boss has long-held an ambition to host an international GT race at his New Zealand venues Hampton Downs in Auckland and Cromwell’s Highlands Park.

Quinn’s vision is to invite GT Asia competitors to Hampton Downs for a bespoke one round Australasian Championship event, which would also incorporate Australian GT entrants.

The event could follow a similar format to the annual standalone Macau World Cup GT event, which is run on the same weekend as the time-honoured Macau Grand Prix.

The Gold Coast based businessman has already held preliminary discussions with David Sonenscher, the chief executive of GT Asia promoter, Motorsport Asia Limited, ahead of a further planned meeting later this month.

“Discussions are happening in Asia and what I’d like to do is to have some sort of Australasian GT Championship event,” Quinn told Speedcafe.com.

“Obviously my desire would be to get GT Asia to come to Hampton Downs for a one round event like Macau.”

Quinn’s pitch comes amid a dramatic shift in the Asian GT market with the announcement of the newly conceived Blancpain GT Asian Cup.

The six-round series, which will debut next year, is the latest concept from global GT boss Stephane Ratel and is set to be a direct competitor to GT Asia.

Ratel met with Quinn last year regarding the possibility of hosting a global GT event in New Zealand and is set to visit Highlands Park for the Australian GT Championship finale (November 11-13).

While Hampton Downs is at the centre of Quinn’s latest idea, Speedcafe.com understands the venue could welcome a grid of more than 40 cars for October’s inaugural Hampton Downs 101 Australian Endurance Championship round.

The event is set to crown the official opening of the newly configured and upgraded 3.8km circuit from October 28-30.

A new 1km circuit extension has been constructed while the venue’s facilities have been revamped as part of a $23.5 million investment.

The Australian Endurance Championship will resume with the second round scheduled at the Red Rooster Sydney Super Sprint August 26-28.