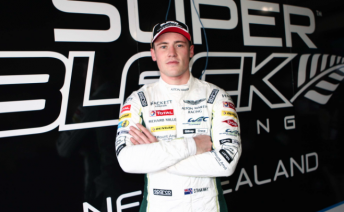 Richie Stanaway has been released from his World Endurance Championship commitments to fulfil a co-driver appearance at the Wilson Security Sandown 500 for Super Black Racing.

The factory Aston Martin GT driver was confirmed as a co-driver alongside Chris Pither in the #111 Falcon in May, but his drive at Sandown (September 16-18) was in doubt due to a date clash with the WEC competing at the Circuit of the Americas.

However, Super Back Racing has now confirmed that the 24-year-old will now be able to complete the Sandown 500, Bathurst 1000 and Gold Coast 600 Pirtek Enduro Cup rounds.

Stanaway is due to join up with the squad at Winton later this month to continue his preparations for his maiden Supercars race.

The former single-seater ace has already experienced the Super Black Falcon when he jumped behind the wheel in an additional driver session at Winton in May.

“We’ve had a plan for the enduros and the timing of the teams first pole last weekend at Queensland Raceway is another indication that our form is improving through each event,” said Super Black Racing manager Greg Hahn.

“The team is encouraged by the progress but it’s important that Richie gets as much mileage under his belt as possible.”

The confirmation arrives just a week after the death of Super Black Racing team founder Tony Lentino following a 15 month battle with cancer.