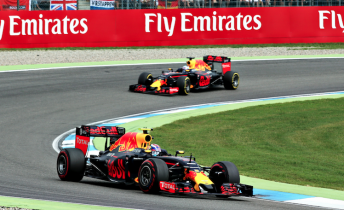 Red Bull boss Christian Horner says his team plans to continue development of its 2016 car as it bids to close the gap to Mercedes this season.

The Milton Keynes squad has emerged as the Silver Arrows’ nearest challengers having leapfrogged Ferrari in the constructors’ standings.

A recent rise in performance in July has seen Red Bull score five podium finishes between Daniel Ricciardo and Max Verstappen over the last four races.

The run of rich form has seen the team reach the mid-season break having met its objective of overhauling Ferrari.

Although Renault has halted plans for an engine upgrade, team principal Horner has confirmed the RB12 will undergo further development before the season ends.

Lying second with a 14 point margin over Ferrari, the team aims to push hard to close the gap to Mercedes.

“We still have a few bits that we can tidy up on the car this year that are in the pipeline that have been kicked off some time ago,” said Horner.

“There is still progress that is going on with the engine, with drivability.

“And there are some positive things in the pipeline that hopefully can help us try to reduce that gap yet further.

“There is still a long way to go, but the objective was to come into the summer break ahead of Ferrari, and now it gives everybody the chance for a well earned rest before the final nine races.

“There are some races on the calendar that will hopefully be favourable to us. And our objective is to try and close that gap still further to Mercedes ahead.

“We were on average within three tenths of a second of (Mercedes in Germany), and what was really encouraging on that final stint was that Nico (Rosberg) was not able to make any inroads into either of our drivers on the soft tyre.”

Formula 1 heads to Belgium’s Spa-Francorchamps circuit for the resumption of the season from August 26-28,