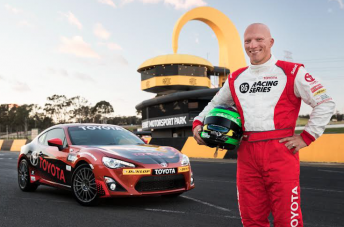 A trio of former Supercars full-timers will contest the second round of the Toyota 86 Racing Series at Sydney Motorsport Park later this month.

The new-for-2016 category has invited Dean Canto, Cameron McConville and Alex Davison as guest drivers to join a bumper 38 car grid at the Red Rooster Sydney Super Sprint from August 26-28.

The trio will help mentor the current field of drivers while showcasing their skills across the weekend’s three races.

Canto brings a wealth of experience to the grid with the 35-year-old currently preparing to team up with reigning Supercars champion Mark Winterbottom for the upcoming Pirtek Enduro Cup.

McConville’s addition to the field arrives after recently securing a competitive return to Supercars as a co-driver alongside Nick Percat at Lucas Dumbrell Motorsport for September’s Sandown 500.

The 42-year-old is stepping up his racing commitments after leaving a full-time position at the Confederation of Australian Motor Sport last month.

“I haven’t driven an 86 racing car yet, and although I expect the young guys to blow my doors off I still want to be competitive,” said McConville.

“Overall though, I think I can add most value with what’s going on in the paddock; helping drivers focus their racing campaign, and hopefully, career.”

The 37-year-old will be competing in both the Carrera Cup and Toyota 86 Racing Series over the weekend.

“These cars are so closely matched; it will be interesting to see how things go,” said Davison.

“Good race-craft will be the key to success, and that’s an area where I think I can offer some pointers to the regulars.”