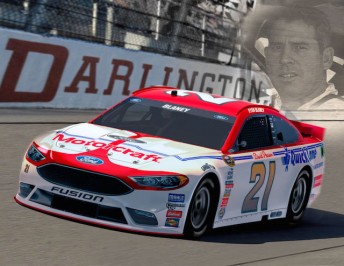 The Wood Brothers have unveiled a 1970’s tribute which it will run for Ryan Blaney at the Bojangles Southern 500 Sprint Cup race on September 4.

Blaney’s machine will be painted in the colours that saw David Pearson drive to the unofficial NASCAR triple crown in his 1976 Mercury Montego.

Hall of Fame crew chief Len Wood called the shots when Pearson won the Daytona 500, Charlotte World 600 and the Southern 500 40 years ago.

“We are so excited that we were able to work with Motorcraft, Quick Lane and Ford Performance to make this paint scheme happen,” said Eddie Wood, co-owner of the Wood Brothers Racing Team.

“It’s hard to believe that it’s been 40 years since all that happened.”

The throwback livery includes Pearson’s name on the door, which pays homage to the winningest driver in the Wood Brothers’ 66-year history.

“David Pearson is such an important part of our history, getting 43 of our 98 wins over seven years, that we’re proud to put his name on this race car,” said team co-owner Len Wood.

“We had to incorporate our current sponsor Motorcraft/Quick Lane into this design yet stay true to the original, right down to the blue stripes across the hood and down the side panels and the silver wheels.”

The cars ran as Montegos again in 1977 when they won at Riverside and Darlington and grabbed five pole positions, again with Pearson behind the wheel, Wrigley’s Spearmint Gum duct taped to the dash as was his custom.