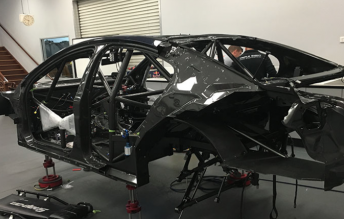 Triple Eight had planned to deliver a new car for the six-time champion at the Sandown 500 in September, but has decided to push forward its debut to the August 26-28 event.

The Queensland squad has elected to take advantage of a lengthened mid-season break following the cancellation of the Kuala Lumpur round to complete the build.

The chassis will replace Whincup’s current car that was debuted at last year’s Sandown 500.

Triple Eight has already constructed new cars for Craig Lowndes and Shane van Gisbergen prior to the start of the season.

“We have decided to shift it up a gear and get the chassis ready earlier,” Team manager Mark Dutton told Speedcafe.com.

“As KL is no longer happening we have decided to do this otherwise we would have debuted it at Sandown.

“It (the new chassis build) was always dependent on how we were going on track and we haven’t been tearing up cars.

“Things have gone well so we are taking up the opportunity.”

Whincup’s latest chassis build comes at a time where Triple Eight is also preparing a new car for Team 18, which will also make its debut at Sydney Motorsport Park.