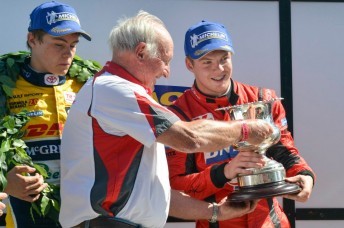 Amon had been recovering from recent health issues which had prevented him from flying to Le Mans for the 24 Hour race in June which marked the 50th anniversary of when he won alongside compatriot Bruce McLaren.

The famous victory in the Ford GT40 ended Ferrari’s domination of the twice-round-the-clock sports car classic.

Amon, born in the Manawatu town of Bulls, had moved to the picturesque Taupo in recent years.

Amon had battled cancer in recent years but retained a close interest in both Formula 1 and sportscar racing.

He had contest 96 F1 races for a variety of teams which included Lotus, Cooper, Ferrari, March, Matra, Tyrrell, his own team in 1974, BRM and Ensign.

His family put out a brief statement announcing his death.

“Chris battled cancer in recent years but retained not only a close interest in Formula 1 – and his very wide range of favourite topics – but also his wonderful sense of humour complete with infectious chuckle,” the family statement read.

“The family request privacy at this very difficult time.”

He was universally regarded as one of the finest open wheel and sportscar racers in the world.

Amon had retired from F1 in 1976 when he was considered the best driver never to win a grand prix.

He returned to New Zealand in 1977 and married Tish before going back to life on the farm.

“While motor racing was never forgotten, it went on the backburner as he settled back into life in New Zealand after 15 years away,” the family statement continued.

“They were soon joined by daughter Georgie followed by twins James and Alex.”

Amon had continued to hold close ties with Toyota with the winner of the Toyota Racing Series earning the trophy named in his honour.

He was awarded an MBE for his services to motorsport in 1993, and was inducted into the New Zealand Sports Hall of Fame in 1995.

Speedcafe.com passes on its condolences to Amon’s family and friends.