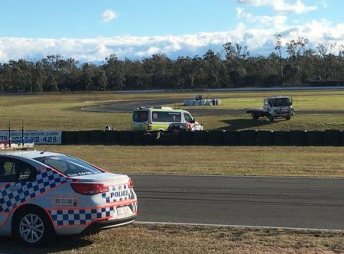 The aftermath of the incident Pic: Queensland Times

A competitor has died following a crash at Queensland Raceway this afternoon.

The 68-year-old driver collided with a tyre barrier at the Ipswich venue during a round of the circuit’s Midweek Sprint Series.

It appears the car made contact with the tyre barrier as the race used the Clubman circuit layout for the event.

The incident occurred at approximately 2.30pm this afternoon.

Paramedics performed CPR on the driver before he was pronounced dead.

The Forensic Crash Unit and Workplace Health and Safety officials are at the scene.

The driver is believed to be from northern New South Wales and was competing in a timed event which involved a range of vehicles.

It is the latest in a number of fatalities which have occurred at the circuit over the years with top British Porsche racer Sean Edwards losing his life when instructing from the passenger seat in 2013 in the same year a motorcyclist was killed.

Update: It has seen been reported that the deceased driver was Dennis Smith from Alstonville, New South Wales.