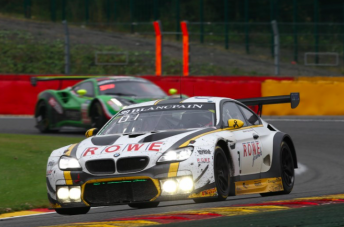 The Sims/Maxime Martin/Phillipp Eng entry rose to the front on Saturday evening thanks to a mix of strong strategy and faultless driving.

It faced a stern challenge from the #8 Andy Soucek/Wolfgang Reip/Maxime Soulet Bentley, which traded the lead through much of the race’s second half despite a series of penalties for pitlane infringements.

An unscheduled pitstop for a deflating tyre on the Bentley 90 minutes from home, however, left the Rowe BMW as the only car remaining on the lead lap.

A heavy downpour with 30 minutes left threw one last curveball at Sims, who kept his BMW on track while several aquaplaned off behind.

“It’s a very proud moment for all involved BMW has done a fantastic job with the M6 in its first year of racing,” smiled Sims.

“Winning the biggest GT race in the world in the first year, it doesn’t get much better than that.”

Remaining second despite a penalty for a yellow flag infringement, Soucek then slipped back to fifth in the late race chaos, which saw the field forced to scramble back to the pits for wet tyres.

That elevated the #86 HTP Mercedes to second, seemingly capping a strong comeback from the five-minute penalties served by the top six qualifying AMGs in the early stages.

An unsafe release from his final stop saw Maximilian Gotz handed a drive-through penalty, which dropped the #86 entry back to an eventual fifth .

WRT’s #6 Audi had remained on the lead lap during the night before Christopher Mies was forced to abandon ship when a fire broke out with five hours to go.

Maxime Jousse led the #76 IMSA Porsche to victory in Pro-Am, while Australian Liam Talbot took the flag in the Am Class winning #888 Kessel Ferrari.

The #22 Nissan GT-R being shared by Academy winner Matt Simmons meanwhile finished 37th outright and 13th in Pro-Am and after losing time with electrical issues during the night.

Shane van Gisbergen’s hopes of victory aboard Garage 59’s #58 McLaren had fallen apart at halfway when co-driver Combe Ledogar collided with a Lamborghini.

The car lost further time with a series of mechanical issues in the race’s second half – including a small fire caused by a faulty gearbox solenoid.